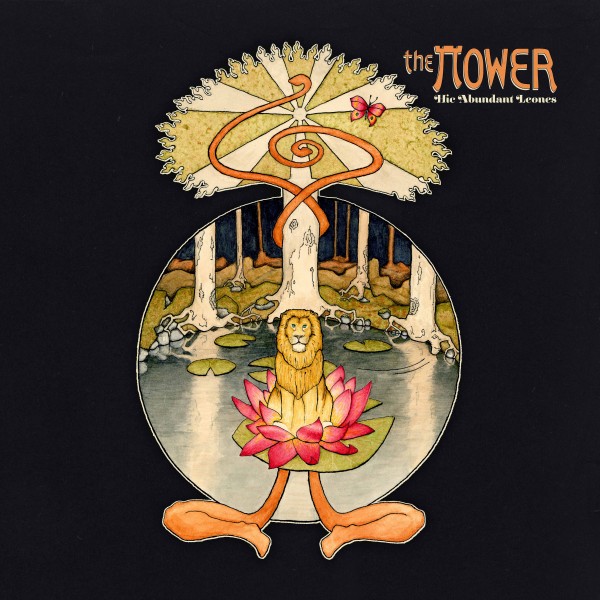 “It was back in 1938 that the brothers Erik and August and their friend Viktor migrated south. They left the small village in the northern forests where they grew up for the big city and the university, to study the science of harvesting the earth. On the fields beside the burial mounds in old Uppsala they met Tommie, a Soviet refugee. He showed them his sole possession, a blues vinyl from 5300 BC, suspecting that it would fit their melancholy northern souls. The four sat down in a barn and played a blues jam which lasted until 1945, when the war ended and the post-apocalyptic nuclear winter began…”

So begins the extraordinary tale of Swedish ‘bad luck boogie’ combo THE TOWER, whose cryptic, swinging timewarp of a debut LP is now released via London’s Bad Omen Records. The offbeat freakbeat and phantasmagorical psych-blues of Hic Abundant Leones exude an ageless charm and resounding singularity, striking eerie, dreamlike atmospheres that seemingly confirm THE TOWER’s eccentric parallel-universe narrative. Sorting facts from the fantasy of the band’s complex mythology proves onerous; the quartet bonded during “long, all-night rehearsals in an old vicarage outside of Uppsala” and “began as some kind of personal quest for us but once we realised that we had a gospel we started preaching it. It is not something new. It is as ancient as the Sumerian blues records played by the Dionysos cults of the Postapocalyptic Era. Moreover, there have always been prophets of this gospel: wrayed Indians, electric shamans, crazy horses, black skinheads, exhumed singers, diddlying sheriffs, mean lick hookers, third eye girls, many a stooge, all-man brothers, Birmingham attendants of the Sabbath, and many, many more.”

Herculean research reveals that drummer Tommie’s versatile musical history includes stints in Nocturnal Rites, Therion, Saturnalia Temple and ultra-cult early-90s Swedish death metallers Ligament, and that his occult survey Mörk Magi was published by Ouroboros Produktion in 2001. Uniquely, guitarist August is also an esteemed scribe of esoteric texts, recently publishing Tartaros: On The Orphic And Pythagorean Underworld, And The Pythagorean Pentagram on Three Hands Press. Further details prove hard to trace, but the foursome highlight the collaborative vitality that results from their isolated chemistry: “We’re four colourful individuals that all actively contribute creatively. Each of the apostles tell it their own way. The vibe was immediate. We sounded like ourselves right away, probably because we were jamming a lot in the beginning, and jamming automatically emphasises the things you’re good at.”

According to the band’s self-penned timeline, in 1945 they withdrew to their eponymous Tower:

“The four remained in solitude throughout the 50’s, an isolation interspersed only by a Zenith tube radio which brought them pop cultural news-pieces aired by American radio stations. They tried to adapt the rockabilly tunes they heard into their own music but were mostly unsuccessful (their innate sense of rhythm being too crooked).”

Allegedly splitting in the 70s, they returned to the Tower in 1983, where they remained until 2012 – “when rumours of the end of the world enticed them to leave”. They recorded a demo (soon pressed to 12″ by Dybbuk Records) before cutting this mystical long-player. “The days in the studio were smooth. The loveable Joona Hassinen, who we recorded with, made us feel very comfortable, as if we were rehearsing in our ‘tower room’.”

And what is the significance of that peculiar title? “We saw it written on an ancient map of the (then known) world. It literally means ‘here are lions in abundance’ and was used by the cartographer to designate a uncivilised, wild and dangerous territory. When applied to Northern Scandinavia it becomes very weird, because there are no lions here, but this only furthers the poetry by making the lions mythical. The record is such a territory. So is the place where we rehearse. And stages we play on, and the vistas of our minds, the future and the past; the unknowns we want to explore and yet, paradoxically, also the regions where we feel the most at home.”